Here's a few photos from a little photowalk Caitlyn and I did with a visiting friend.

Caitlyn and I had been here when we first visited the Yukon a couple years ago, but we didn’t have much time to enjoy it the first time. Now that we’ve had our first out-of-town visitor, we decided to show him all the wonderful animals the preserve is protecting, and not only did we get to take our time, but we took a guided tour which was really interesting! Did you know that ground squirrels freeze every winter, dropping to -6°C, and every spring they regrow the brain cells they lost? Or that Yukon has twice as many moose as people? Or that the wood bison (the heaviest animal on the continent at 2000lbs!) were thought to be extinct until they found a herd of 200 in Alberta in the 1950s?

We also met a red fox (apparently all foxes with white tips are red foxes) who was “rescued” as a “puppy”, and her rescuers found a dog to nurse it, until they realized it wasn’t a puppy at all! After they realized it was a fox, they called the preserve to take over raising her. The woman who gave us the tour said she’s been trapping foxes for 30 years, and this is the first one she’s seen that rolls over, wags its tail, and tries to bark. She’s escaped a few times, and every time she just wants to see the handlers that raised her. It turns out, she probably wasn’t even abandoned, because vixens make multiple trips to move their kits, so if you ever see an abandoned fox (or deer — this happened with them too) wait half a day before calling any authorities.

It was a beautiful day for a walk through a gorgeous, gigantic park (750 acres!) that felt like unspoiled wilderness, and then we capped it off with a soak in the nearby Takhini Hot Springs, and came home for some delicious locally-made bison sausages. 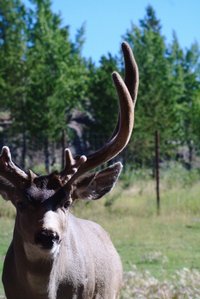 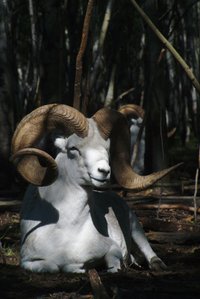 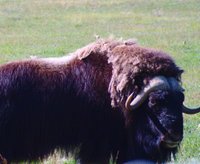